What do we mean by virtue and character and why is it important? 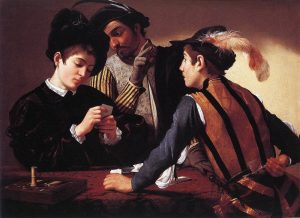 Although you may be anxious to begin the practical part of educating virtue in your character, you first need some basic understanding.

The first stage of virtue education, in fact, involves your mind and knowing more about virtue is the first building block in making your virtuous. Socrates went as far as saying that if we remove ignorance about virtue we will become virtuous.

That’s probably a little bit too far, and Augustine reminds us that, since we have a fallen will (and not just a bad memory), knowledge alone will not produce virtue. As depicted in the Caravaggio painting above, it is perfectly possible, for example, to know about virtue and still cheat.

Nonetheless, knowledge about virtue is important and it does contribute to making us virtuous. It would be unthinkable, in fact, to imagine a person growing in virtue without knowing anything about it.

So, let’s build a little bit of virtue literacy with some basic questions. What do we mean by virtue? How is it related to character? And why is it important?

The word ‘virtue’ has sadly slipped out of our contemporary vocabulary and most of us would struggle to define it with any degree of precision.

Try writing the word ‘virtue’ into your search engine and see what comes up on the internet. You may want to refine your search to find definitions of virtue, or lists of virtues in different traditions.  If you are working in a group, this might be a good activity to do together and discuss. As you will discover, there are many definitions. But there are also some common features. Can you identify them?

Here is a nice, complex definition:

‘Virtues are stable dispositional clusters concerned with praiseworthy functioning in a number of significant and distinctive spheres of human life’ (J. Arthur).

Virtue might be defined as ‘the habit of being good’.  It is the expression of a moral person and the foundation of all ethics.  We can also think it as the opposite to vice. Or, if you are a Christian, you might find it helpful to think of virtue and vice as synonyms for the biblical terms ‘righteousness’ and ‘sin’, with the former representing the perfect moral character of God and un-fallen human nature, and the latter  indicating everything that falls short of that. 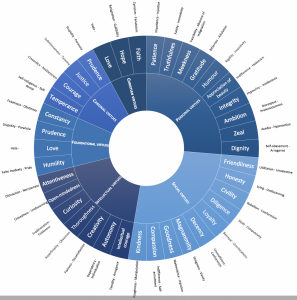 We can break this lofty concept down even further by thinking about the virtues (in the plural, rather than in the singular).  The virtues, in fact, can be listed, organised and classified in ways that give a fuller understanding of what virtuous character actually looks like.

Here are some common lists of virtues (you can see more virtues by downloading and zooming in on this ‘Virtue Wheel’ image).

These lists are not exhaustive, and there are plenty more.   The virtue education project that you will follow through this site, will focus on 13 of the main virtues taken from these lists. 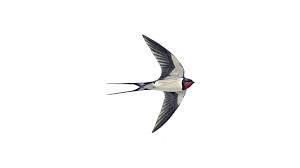 What then is the link between virtue and character?  Why do we speak of ‘character and virtue’ education?

When Aristotle said that ‘one swallow does not make Spring’, he was saying that a few isolated virtuous actions are not enough to shape your character.  You can’t perform one act of compassion and, because of that, be a compassionate person. What is needed is a stable commitment to virtue that eventually becomes a natural disposition that marks of deep transformation of character (you will learn more about what this means in practice in phase #3 – Habituate).

You may have approached this site about virtue education thinking that you would find a ‘bucket list’ of rules that prescribed a set of do’s and don’ts and that slavish obedience to these rules would change your character.  Sorry, that is not is the case.

A brief note must be made here about character and personality.  There is a lot of talk about the personality, and about our legitimate different human dispositions.  This site is not about personality.  We use the term ‘character’ to talk about moral dispositions, and hence about how we should all be.  So, whereas it is ok to be an introvert or an extrovert, is not ok to be impatient, unloving or unmerciful.  Personality is subjective and diverse. Virtuous character is objective and unified for all.

Is it really important?

Why then is virtue education important?

There are many reasons for educating virtue, and some of these will hopefully motivate you:

Overall, cultivating virtue in your life is important because human beings are designed for virtue. Humanity is designed for virtue and you will fulfil your purpose and flourish in your humanity as you become virtuous. If you are a Christian, growing in virtue will glorify your Creator who made you to be virtuous.

These were some short introductory thoughts to some very deep and complex issues.   Now let’s look a little more at the roots to help you appreciate the vast traditions that are behind virtue education.